For even more information on Pitt County Genealogy, check out the East Carolina Roots Forum, where you'll find surname-specific forums, as well as a General Discussion forum.

Alright, we have yet another mystery on our hands. I'm hoping some of you might actually have some pieces of information that can fill in the blanks for me. Below are two deeds from Pitt County. The first item below is a deed in which Mary FORNES gives land to her son, John FORNES. The second item is Mary FORNES granted Power of Attorney to "my Trust friend James CLARK in … END_OF_DOCUMENT_TOKEN_TO_BE_REPLACED 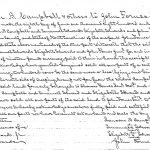 I'm excited about this one! This finally tells me the likely surname of my 5th great-grandmother, Elizabeth, wife of Emanuel EDWARDS of Beaufort County. It appears from this deed that she is probably a FORNES... but I'm still not 100% certain about the identity of her father, although at least this helps me zoom in on a family branch. She is one of the parties selling land … END_OF_DOCUMENT_TOKEN_TO_BE_REPLACED 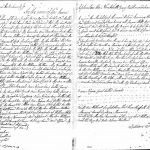 After reading through the brilliant genealogy work of Pam F. Bennett at Ancestry.com on our shared Mills line, I am very interested in the Wallace family, who she suspects is the family of which Keziah, wife of Nasby MILLS of Pitt County, belongs. She suspects that William Wallace, who died in Martin County circa 1775, might have been Keziah's father. I know there are … END_OF_DOCUMENT_TOKEN_TO_BE_REPLACED 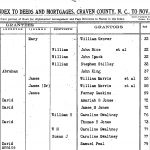 William MORRIS and his wife, Susan McINTOSH MORRIS, were my 4th-great-grandparents. James ADAMS, Sr. was the father-in-law of Thomas MORRIS, the brother of William MORRIS and husband of James's daughter, Nancy ADAMS. These deeds are between William and Susan MORRIS and James ADAMS. The land being sold was apparently something Susan either inherited or received as a gift … END_OF_DOCUMENT_TOKEN_TO_BE_REPLACED 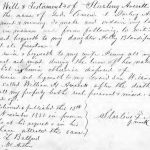 The following is the will of Starling AVERITT, son of David AVERITT of Pitt County. He was born about 1778 and died in 1855. He names his wife, Penny, his daughter Polly BLANDIFORD, and his grandson "William H. BURNETTE sometimes called William H. AVERITT." The Last Will & Testament of Starling Averitt Decd In the name of God, Amen. I Starling AVERITT Being of sound … END_OF_DOCUMENT_TOKEN_TO_BE_REPLACED 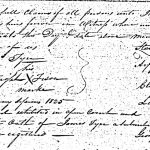 Below I have transcribed a deed from four of the heirs of David AVERITT, Sr. They are selling the land they inherited from their father. In his will, David said he had eight children. I think one of the girls below must be using a different name than he used for her in his will, but otherwise, this list, along with the ones named in his will and his son David (who I think is … END_OF_DOCUMENT_TOKEN_TO_BE_REPLACED 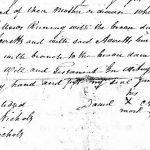 Below I have transcribed the will of my 6th great-grandfather David AVERITT. In it he mentions some, but not all of his children. In the will he says he wants all of his land divided between his eight children after their mother's widowhood or after her death — which would suggest that he was married before and his other two children were from a previous wife. Children … END_OF_DOCUMENT_TOKEN_TO_BE_REPLACED 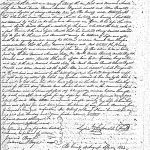 The following was found in Pitt County Deed Book CC, page 221. This Indenture made and entered into this fourth day of August in the Year of our Lord One Thousand Eight hundred and Twenty-three between Lydia ARNOLD of the State of North Carolina and County of Pitt of the one part and Ormond ARNOLD, Sally COX, Noah ARNOLD, Burrell ARNOLD, Bryant ARNOLD, and Allen ARNOLD, heirs … END_OF_DOCUMENT_TOKEN_TO_BE_REPLACED 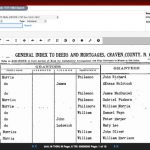 A growing list of Eastern North Carolina counties now have their deeds and other records online. From now on links to all of the following Register of Deeds databases can be found via the Research Databases link in the top menu of this site. Interestingly, some counties also have Slave and Co-Habitation Records, as well as detailed land grant plats. Happy searching! … END_OF_DOCUMENT_TOKEN_TO_BE_REPLACED 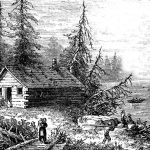 The following deed abstracts, all of which relate to members of the Speir family — either as grantor, grantee, witness, or neighbor — are just one small sampling of the wealth of information that can be found in Index and Abstracts of Deeds of Record, Pitt County, North Carolina by Judith DuPree Ellison. There are four separate volumes, but the abstracts below are only from the … END_OF_DOCUMENT_TOKEN_TO_BE_REPLACED 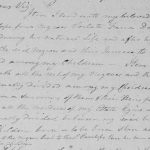 The following document was found in the Craven County Estate Records dated 1779. Based on the information I have, this John SPIER (or John SPEIR) was born 1 Feb 1741, probably in Edgecombe County, and died 2 Feb 1770 in Pitt County or Craven County. He married Penelope BARBER, daughter of John BARBER or Manoah BARBER (I'm still trying to sort out those relationships based on … END_OF_DOCUMENT_TOKEN_TO_BE_REPLACED 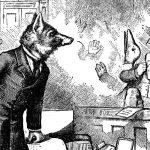 Next to genealogy and history research, my second favorite obsession is watching MeTV. I love those old shows, from Andy Griffith to Macgyver, and I especially love courtroom and mystery shows, like Perry Mason and Matlock, Diagnosis Murder and Columbo. Perhaps that's why I like poring over old court records — whether it's apprentice bonds, or depositions given during murder … END_OF_DOCUMENT_TOKEN_TO_BE_REPLACED