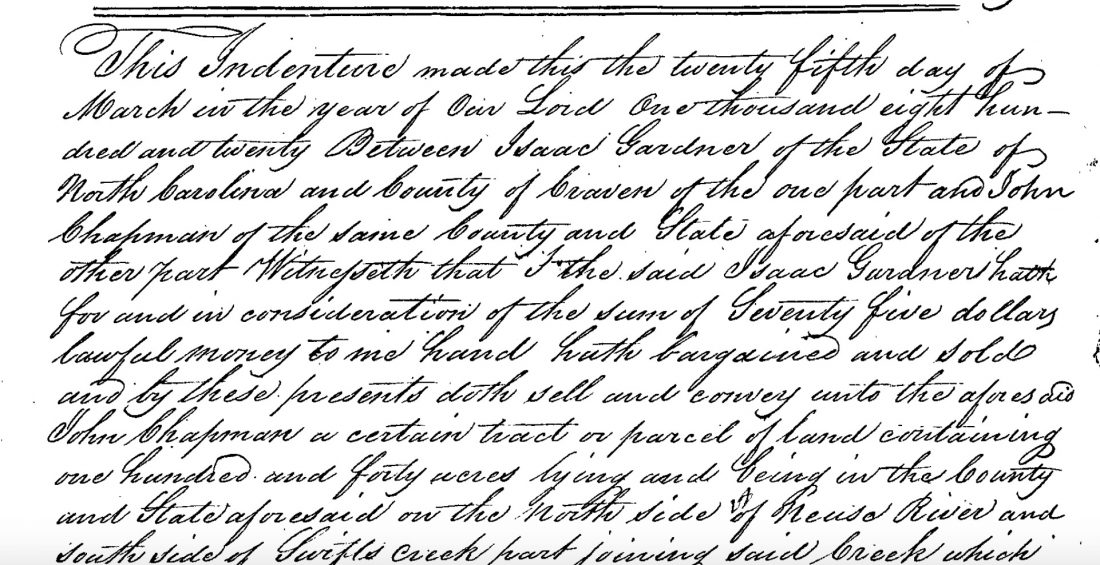 The following is a deed for the sale of a parcel of land from Isaac GARDNER to John CHAPMAN of Craven County.

This Indenture made this the twenty fifth day of March in the year of Our Lord One thousand eight hundred and twenty Between Isaac GARDNER of the State of North Carolina and County of Craven of the one part and John CHAPMAN of the same County and State aforesaid of the other part Witnesseth that I the said Isaac GARDNER hath for and in consideration of the sum of Twenty five dollars lawful money to me in hand hath bargained and sold and by these presents doth sell and convey unto the aforesaid John CHAPMAN a certain tract or parcel of land containing one hundred and forty acres lying and being in the County and State aforesaid on the North side of Neuse River and south side of Swifts Creek part joining said Creek which land lies in two separate parcels the first is bounded as follows. Beginning at two ashes in the center of two Cupelow gums on the south side of the run of Swifts Creek Walls corner of his [Isaac] KEMP patent their with the reverse of Walls South seventy six east eighty two poles to an oak stump and Mulberry tree in WALL’s field now CHAPMAN’s beginning corner then with his given line South forty nine west One hundred and fifty three poles to a stake in the center of a sweet gum and Holly said Chapman’s last corner of his CHARLTON survey then North to Swifts Creek run then down the various corners of said run to the beginning containing forty acres more or less.

Also another tract lying in the Baybush pocoson containing one hundred acres it being part of a patent granted to Joel WALL and Tolburt [Talbot] WILLIAMS for two hundred acres and said Wall by agreement between him and Tolburt WILLIAMS was to have the upper part ajoining John MOLESES land and I the said Isaac Gardner claiming under said Wall doth and hath agreed to sell all my right and title in said patent to John Chapman said patent bearing date the 15th day of June 1803. Bounded as follows Beginning at a Stake in the South edge of the Baybush pocoson it being the beginning corner of said Tolburt WILLIAMS land patented by Isaac KEMP and runs with the last line of said land No 61? west 138 poles to a corner of the same in said Baybush then with another line of the same No 48 poles to a red oak in said line, said CHAPMAN’s corner, then with his line South 88 west 80 poles to a pine then South 40 west fifty pole, then South 80 west 50 poles, then South 135 poles, then East 158 poles to a stake then to the beginning. To have and to hold the aforesaid premises together with all and every advantage thereon or arising thereupon unto him the said John CHAPMAN his heirs or assigns forever. And I the said Isaac GARDNER do by these presents oblige myself my heirs Executors and administrators to warrant and forever defend the aforesaid premises from me or mine or from all other persons to him the said John CHAPMAN he and his heirs forever. In Witness whereof I have hereunto set my hand and Seal the day and year above written. 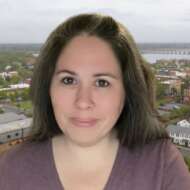 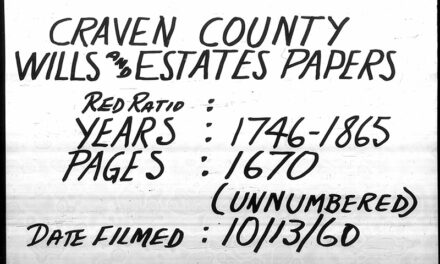 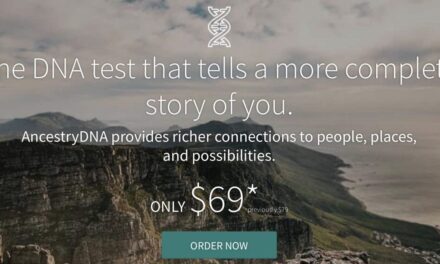 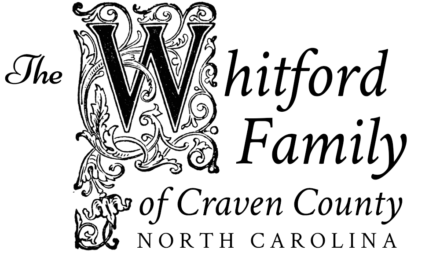